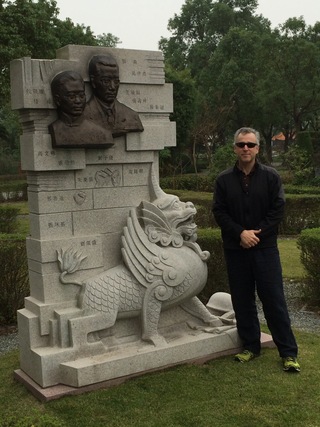 See the online article about the 6-year ERC project concerning war crimes and the dissolution of the Japanese Empire that I managed.

Department of East Asian Studies at the University of Cambridge

See a short video that describes the faculty and department.
_______________
Interested in graduate studies at Cambridge in East Asian studies? See my short video.

Interested in Japanese studies in Cambridge University as an undergrad? (I am Director of Studies at Corpus Christi College).

You can also see a short video about Japanese studies and my research at the faculty here.

What does a prof in Japanese history do?

Barak Kushner is Professor of East Asian History and Chair of Japanese Studies in the Faculty of Asian & Middle Eastern Studies at the University of Cambridge. He obtained his PhD in History from Princeton University. He has written three monographs: Men to Devils, Devils to Men: Japanese War Crimes and Chinese Justice (Harvard University Press, 2015), (Winner of the American Historical Association's 2016 John K. Fairbank Prize). In addition, he penned Slurp! A culinary and social history of ramen - Japan's favorite noodle soup (Brill, 2012), now available in a Japanese translation, traditional Chinese translation, and Chinese mainland version. Slurp! was awarded the 2013 Sophie Coe Prize for Food History, the longest-running and most generous prize for writing in food history in the English language. The Thought War - Japanese Imperial Propaganda (Hawaii 2006), is also available in a Japanese translation. In 2020, he hosted and narrated three episodes of a television documentary series on war crimes trials in China produced by the Shanghai Media Group. For more on this series see the Asia-Pacific War Crimes Trials link.

From 2013 to 2019 Kushner managed a European Research Council funded project, “The Dissolution of the Japanese Empire and the Struggle for Legitimacy in Postwar East Asia, 1945–1965.” This grant examined the impact of the fall of the Japanese empire in East Asia. Over six years, the project coordinated numerous postdoctoral research associates and offered scholarships to PhD students in an effort to investigate this important historical moment. Barak co-edited a volume with Dr. Sherzod Muminov concerning new research emerging from this project: The Dismantling of Japan's Empire in East Asia: De-imperialization, Postwar Legitimation and Imperial Afterlife, (Routledge 2017), and a second volume: Overcoming Empire in Post-Imperial East Asia: Repatriation, Redress and Rebuilding (Bloomsbury 2020). A third volume, co-edited with Dr. Andrew Levidis, is In the Ruins of the Japanese Empire:  Imperial Violence, State Destruction, and the Reordering of Modern East Asia (Hong Kong University Press 2020). Sadly, that project website was not kept alive at Cambridge but through the magic of the "wayback machine" internet archive, you can view all the members and affiliates, as well as the output, conferences, and workshops that the project produced here.

Barak also co-edited a volume about Japan's lost decades with former Asahi Shimbun editor-in-chief, Funabashi Yoichi, entitled Examining Japan's Lost Decades, also in a Japanese translation. He assisted in this two year-long project at the Asia Pacific Initiative think tank in Tokyo by managing the research group and editorial process, as well as helping to lead the international conference. He completed a large translation project, with 6 graduate students, of a book which examines the intersection of media, history and politics entitled Media, Propaganda and Politics in 20th-Century Japan. As a scholar he has written on wartime Japanese and Chinese propaganda, Japanese media, Sino-Japanese relations, humor, food history, BC class war crimes, and the Cold War. Currently, he is working on a monograph concerning war crimes in East Asia, tentatively entitled The Construction of Injustice in East Asia: Japan versus its neighbors.

Kushner's work has been the focus of numerous articles in the major Japanese presses, including interviews in the Asahi Shimbun (which featured a page-long piece), Yomiuri Shimbun, (including a mention on page one) Mainichi Shimbun, Sankei Shimbun, Tokyo Shimbun, Nikkei Business Weekly, and a variety of provincial newspapers. He also appeared in the popular Japanese television variety show 『世界ふしぎ発見』 (The World's Amazing Discoveries!) in their special 追跡! 世界を駆け巡るRAMEN, and did an interview about the mainland translation of Slurp! in Chinese. He has been a guest on the BBC radio show, In Our Time, to discuss WWII in East Asia, The Forum show on the impact of the Meiji Restoration, and numerous other radio interviews and podcasts concerning Japanese culinary history. He served as a consultant for the NHK docudrama series about the Tokyo Trial, (東京裁判), broadcast in Japan in 2016 and 2017. The series was nominated for a prize from the Japanese Agency of Cultural Affairs due to its high ratings. He was interviewed for the French-produced documentary on Japanese nationalism and history, Japon, la tentation nationaliste, a documentary with French, English and Japanese versions by director Watanabe Kenichi, and broadcast worldwide in 2017. Kushner was interviewed by the Jiangsu Broadcasting Corporation of China for their 5-part documentary, The Sword of Justice (正義之劍), concerning the history of war crimes trials in China, and which was broadcast in August 2017. He was interviewed for a Discovery Channel documentary on Japan's war history and its surrender in World War Two, and in Australia for a documentary series on "Total War" and the aftermath of war, broadcast by the History Channel internationally.

His academic articles have appeared in Past and Present, Journal of Contemporary History, Diplomatic History, The International History Review, Japanese Studies, Journal of Popular Culture, and the Historical Journal of Film, Radio and Television, as well as Japanese and Taiwanese peer-reviewed journals. He has published numerous book chapters in edited volumes dealing with: a postwar media history of Godzilla, wartime propaganda in Japan, the Chinese influence on early 20th century notions of modern cuisine in Japan, Japan's 1940 Olympic plans, the image of Japan in Chinese humor, war crimes history in East Asia, and other topics.

Dr. Kushner received his BA from Brandeis University and then began his career as a high school teacher of social studies in Chicago. Later, he traveled to Iwate, Japan where he taught English, lived in a Buddhist temple, and attended Japanese elementary school, studying Japanese along with other students ages 6-12. On and off he lived in Japan for about seven years - in Tokyo, Yokohama and Iwate, at times studying at Rikkyo University and Tokyo University. After completing courses in advanced Japanese, Kushner was an editor/ translator at the National Institute for Research Advancement, a think tank in Tokyo. He taught western history at Shenyang Teacher's University in the north of China where he also studied Chinese and began research in Chinese history. After returning to the United States he attended graduate school at Princeton University, did more Chinese language training in Taipei, Taiwan and then received a PhD in history.

Kushner has obtained a few prizes and fellowships in the course of his research. He was the 2019 recipient of the 15th Nakasone Yasuhiro (Japan) Award for Excellence. He also obtained a multi-year 2018-2021 grant from the Chiang Ching-kuo Foundation (Taiwan) for a digital humanities project on war crimes and mapping, a multi-year 2014-2017 grant from the Toshiba Foundation to investigate the role of media in the formation of historical opinions, a 2012-2013 British Academy Mid-Career Fellowship, a 2012 and 2007 Japan Foundation Endowment Committee Grant; a 2010 British Academy Short Term Grant to Academia Sinica, Taiwan for a research project on the dissolution of the Japanese empire and during the same time he was part of a Taiwanese Ministry of Education Foreign Summer Grant sponsored international academic team exploring the project "Postwar Taiwanese History, 1950-1960." In 2009, he participated in a Taiwanese Ministry of Education Foreign Summer Grant sponsored academic group which analyzed the theme, "Exploring the Cultural Faces of Taiwan 1945-1960." In 2008, he was awarded an Abe Fellowship to conduct research (from 2008-2010) into the legal history of the early Cold War in East Asia. He used the award in both China and Japan. While teaching at Davidson College (2002-2005) he received support from three Freeman Foundation grants to conduct research in Japan, China, and Korea. In 2004, Dr. Kushner also received Freeman Foundation support to travel to Mongolia on an SIT-sponsored tour.