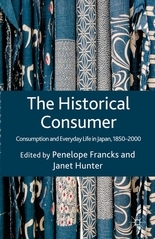 Order this book directly from the publisher

I argue that although sugar was consumed as a luxury item in early-modern Japan, in the early decades of the twentieth century, and especially during the war years, the consumption of sweets became inseparable from the idea of Japanese modernity, linked to the act of consumption within the sphere of Japanese empire.